WE SHIP WORLDWIDE WITH DHL

BLACK IS BEAUTIFUL - THE BEAUTY OF THE BLACK HERITAGE

“BLACK IS BEAUTIFUL” THE BEAUTY OF THE BLACK HERITAGE

Did you know that “Black is beautiful” was a catchphrase from the Black Power movement in America in 1968? I’m guessing you didn’t, so let me throw a little more light on it.

The phrase emerged in an attempt to correct the notion that black is ugly and something to be ashamed of, which is what the American society implied in a thousand ways. “Black is beautiful” was a way of embracing the beauty of black culture and identity. Till date, it has continued to encourage the black race to appreciate the legacy of their past and has also inspired cultural pride in present-day black achievements.

Africa is known for her beautiful sites and cities, unique wonders of nature, dramatic coastline, phenomenal wildlife, rich forests and astonishing architecture. The continent has a unique heritage blessed with abundant natural resources and has a wide range of beautiful places to visit.

The culture of the African people is what distinctively marks them from one another. Culture is often seen as the uniqueness shared by a people and the people's values can be seen as part of their culture. Although, when we discuss African culture and values, we should not assume that all African societies have the same language, music, beliefs, mode of dressing and so on. Rather, there are underlying similarities among many African societies which, when compared with other cultures, reveal a wide gap of difference.

However, Africa’s most valuable resources are her people, and this is not limited to the prowess and physical strength of the men, but also the industrious and tenacious women who have left indelible prints in the sands of time. Over the years, we have seen some big names that are undoubtedly changing the world and bringing the African race to the fore.

One cannot talk about black women who are change-makers in the world without mentioning Oprah Winfrey, whose contributions are way too numerous to count. Her recent Times Up speech at the Golden Globes got the whole country talking and instigated a million wishes that she would run for the presidency. Also worthy of mention is Michelle Obama who is a strong inspiration for black women worldwide and has continued to use her influence to promote other black women. Another notable personality who championed the cause for black recognition was Rosa Parks, whose dogged determination not to relinquish her seat to a white on a segregated bus, prompted nationwide efforts to end racial segregation of public facilities. These are of course few out of many.

The world no longer sits silently in the matter of racism, many thanks to the likes of Rosa Parks, Martin Luther King Jr and the others who began this fight decades ago. The voice of the black race is now being resounded globally to sing the song of our freedom and importance. We are NOT and WILL NEVER BE second class citizens in the world. We are of equal rights as any other race and proudly so.

Today, we no longer say “black is beautiful” as a reminder to embrace our identity and culture but we say it because it simply is the truth. Black is literally BEAUTIFUL.

Talk about your store

An African Fashion and Lifestyle Brand whose ethos is to provide contemporary premium Ready to Wear African clothing to women who love ethnic fashion. We employ local artisan in Africa and support them to bring to life designs that empower women to feel and look confident and comfortable wearing African Prints. We believe that African fashion should be a way of life and that we can wear African prints in ways that are stylish yet original to its culture. We believe that Bold is Beautiful and we want our women to tell their stories through our designs.

Get 15% off your first purchase when you sign up! Plus, be the first to know about sales, new arrivals and exclusive offers!

Let customers speak for us

I’m still new to Cumo and had doubts initially when I was browsing the website. I decided to take a risk and give it a try . I can happily confirm that it was worth it. Looked like a true African Queen today at work and received a lot of compliments ☺️ 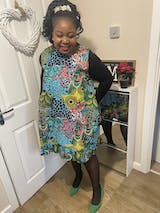 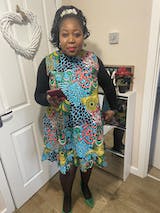 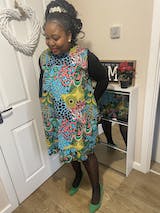 The skirts are very nice wellmade,
Materials very good quality.
I would suggest that you make them with a little let fabric.
But all in all a wonderful design.

The item in it self is beautiful,
however I received the wrong size to what is on my order,
I understand it was a busy time of year, I then sent an email asking how can we correct this problem, still no reply, so far very disappointed.
I will always support small business but I did not feel valued and this is not my first problem with this company.

Love this dress, nice fitting which makes it look like it was made for me. I’ve given it 4 stars because I feel the sleeves are too wide, but that may be due to my personal preference.

Initially had a problem with delivery and was disappointed as a first time customer but was contacted personally and another order sent out which I received in 2 days. Sender was very helpful and sorted the problem quickly, once made aware of it.
The product itself is of great quality and the colours are vibrant. The Kimono is true to size. Definitely will be returning for more items. Customer Service is fantastic.

You ask for a review but I have not yet received my order. Where is it please or refund ASAP

A
BACK IN STOCK - African Print Wrap Midi Dress - Lola Anonymous
Love it!